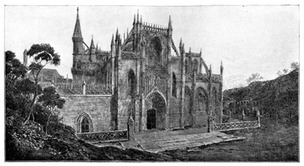 Prince Henry’s school of navigation was founded in 1418 and was located in Sagres, Portugal. Before the establishment of this school, there had been no expeditions into the Mors, or “The Sea of Darkness”.
Prince Henry had sent expeditions into “Mors”( Mors (mythology), the personification of death in Roman mythology) which had never been done before (sailors and navigators had been afraid to sail into the mors as it was thought to be home to many monsters and boiling water from the equator). In fact he had sent 14 expeditions into modern day, Cape Borjador (The mors) and even further south.
Above: A illustration of Prince Henry's School
of Navigation.

Secondry sources:
the mythology in the sea of darkness